Brendan is a long time friend of mine. I’ve known him long since he helped me out against The Nation Master entity, and I’ve checked his blog — I Hate Linux — regularly since before tdaxp was born. I am now proud and delighted to announce he has allowed me to host his review for The FairTax Book After reading Brendan’s column, I strongly support the tax reform he proposes.

What would you say if I told you that there is currently legislation in front of the House Ways and Means Committee with 52 cosponsors that would not only eliminate the federal income tax, but also remove the need for the IRS, allow you to take home your entire paycheck without Social Security and Medicare deductions, and make April 15th into just another spring day?

Let’s face it, the current income tax system is a nightmare. Every year millions of American taxpayers (both individuals and businesses) spend countless time and money on making sure that they are paying no more than they owe, while countless others take the easy way out and just file the short form in order to save time, but end up paying far more than they owe because they didnâ€™t spend the time or energy to take the deductions that they are entitled to and instead overpay. To add insult to injury, even tax professionals like H&R Block have made mistakes with their own taxes. If its so easy for experts make mistakes, what does that say about the potential unnecessary complexity of the current system? 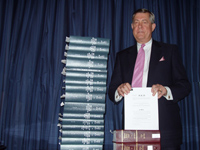 Really the only people who understand the existing system are our legislators and the lobbyists in Washington who derive power from manipulating it with the end result of those without lobbyists having to pay that much more to make up the difference. It is time for that to end.

Before going into some of the details of the FairTax, take note of the image to the right of Congressman John Linder (R-GA), the author of The Fair Tax Act of 2005 (HR 25) holding it in comparison to the existing income tax code. 132 pages vs 50,000+ pages. Quite a difference isnâ€™t it?

In addition to my belief in the FairTax, the reason I write this is because of my concern for the upcoming 2006 elections. Even with the new found interest in abortion and immigration reform in this country, neither in the Presidentâ€™s State of the Union, nor in the Democratâ€™s rebuttal, nor any other serious political debate so far has put forth anything new of merit that can be part of a platform for either side to rally around in order to maintain or regain control this fall. I believe that the FairTax can and should be that platform.

In short… the FairTax which replaces the entire federal income tax as well as other payroll taxes with a simple embedded national inclusive sales tax of about 23% on new products and services at the retail level that would show up on your receipt every time you buy a CD, TV or even loaf of bread.

At first glance 23% may seem pretty high, but consider the increased price you are already paying due to the income and payroll taxes being paid by every single company in the production chain and ending with the end consumer. With the elimination of those taxes not only would drop prices significantly, but you would end up with more of your money with every payday. As a result with the 23% sales tax being added onto a product whose price has dropped due to not having the supplying companies pay any federal taxes, it pretty much ends in a wash for you as the end buyer.

Under such a system some might be concerned about a lack of exemptions for things like medical care as exists under the current tax system. It doesnâ€™t exist. Thatâ€™s right, under the FairTax system, all new goods and services fall under the tax. Without such a blanket system covering all areas of business we end up in a similar situation to what we have today… high priced Washington lobbyists campaigning for our elected officials to exempt their clients from certain taxes because of the importance of their clients business and its contributions.

Again, under this system, no new product, service or person is exempted from the tax, including the poor who today pay little or no income tax and in order to allow the poor to continue to remain tax free the prebate was created in order to resolve this issue which results in the federal government mailing a check every month to every head of household for the amount of tax that they would pay during the month up to the poverty level.

This way, not only do the poor not pay the tax, but no one does up to the poverty level.

If you arenâ€™t already sold on the FairTax, think for a moment of the cost that US tax payers end up paying for tax compliance. Not only do many businesses and individuals hire professionals to help guide them through the process to make sure that they donâ€™t pay more than they owe… this is still an expensive process in terms of both time and money.

Letâ€™s not forget that the bureaucracy that is the IRS requires massive funds in order to do its collections and enforcement, how much? For their 2005 budget [pdf warning] they requested over $10 billion. Don’t you just love the concept of paying them in order to enable them to do their much loved work?

Under our current system workers and employers pay further taxes under the names of Social Security and Medicare. Under the FairTax these line items on our pay stubs disappear, but the programs don’t. Instead, both draw from the same general fund that the FairTax creates.

Let’s not forget that on every payday when you take home all of your earnings and you are free to invest and save it for things such as retirement, a child’s college education, a house or anything else you want… all without any tax consequences whatsoever. Instead of the difficulty of using pretax dollars or hassle of reporting yearly income due to interest as you do today, you simply pay the embedded tax the day you spend it.

I have only scratched the surface on what experts predict would happen after the FairTax went into effect, a larger list of benefits includes:

In large part due to lack of time and not wanting to overload you when reading this I have not written everything there is to know about the FairTax, including answering many of the questions you likely have by this point. If you have interest in learning more, I suggest you read the book or stop by www.FairTax.org to learn more.

The book, written by CongressmenJohn Linder and talk-radio host Neal Boortz, the pair set out to answer many of the questions related to theFairTax with regards to what it is, what would happen after its implementation, as well as a bit of history on how we reached the chaotic tax system we enjoy today. First published in August 2005, it debuted as a #1 New York Times best seller and its updated andpaperback edition to be released in May expected to be greeted with similar attention.

www.FairTax.org is the primary online presence of the grassroots work spearheaded by the Americans for Fair Taxation group in order to provides news related to the campaign, as well as material to help us achieve our goal.

Now that you’ve learned the basics of the FairTax, I encourage you to explore more of it on your own, read the book, ask questions, tell others about it, and call your congressperson and ask them to join in the campaign to destroy the existing tax system and replace it with a more fair tax, namely the FairTax.