Courtesy of gnxp, this great post on the intersection of psychiatry and genetics:

Back in April I posted on the elusive genetics of bipolar disorder, a crippling psychiatric condition affecting over 2% of the population in any given year.

The major message from that article is that although bipolar disorder is massively influenced by genetic factors (around 85% of the variation in risk is thought to be due to genetics) we still don’t really have the faintest idea exactly which genes are involved. This is despite three reasonably large genome-wide association studies involving over 4,000 bipolar patients in total, which generated weak and contradictory results and failed to provide a single compelling candidate for genetic variation underlying this disease.

Similar problems will be faced when we turn genetics on the problem of crime, so the post really is valuable for understanding what the controveries in anticrime gene thereapy will be in 10 to 20 years time.

Obama and McCain con-sponsor a resolution calling for Georgia to join NATO.

Serious talk of expelling Russia from the G-8. Let’s hope so. An organization of economically productive powers, China and India belong in an expanded G-8.. not parasitical states like Russia.

Unfortunately, Bush and Obama are signaling weakness. Fortunately, some countries (may) be doing more than just talk. Courtesy of zenpundit… are the Israelis killing Russians?

Catholicgauze is on it. He links to markedup Google maps for 8/12, 8/11, and 8/9. More info available at the Keyhole forums.

First Obama was for small budget deficits. Then he decided he really wanted more investment. For a while it looked like he was going to support universal health care. But now he wants young poor workers to subsidize rich old men and women.

My Way News – Obama’s ‘no income taxes on seniors’ draws critics
WASHINGTON (AP) – If you’re a senior citizen and earn less than $50,000 a year, Barack Obama has a deal for you: a life free of federal income tax.

Sounds appealing, right? Maybe to many seniors. But tax policy experts in Washington are giving it bad reviews. They see it as another subsidy for senior citizens, who already get federal help through Social Security and Medicare and often have economic advantages over other demographic groups.

Seniors typically have paid off their mortgages, many have investments and usually don’t pay taxes on their Social Security benefits. The kids are usually grown, so they’re not saddled with day care or college costs.

“The odds are the retired folks – they’re getting pensions, they’re getting Social Security, they have investment assets, they own a house – so … they’re better off than somebody who is 30 or 40 years younger who’s trying to buy a house (and) trying to start saving,” said Clint Stretch, managing principal of tax policy for Deloitte Tax.

What is Obama thinking? Is he serious? I realize he is not much smarter than George W. Bush was in 2000 when it comes to policy, but even Bush’s income tax cuts could theoretically have worked.

Obama’s tax plan looks like a bigoted attempt to buy off the vote of rich seniors, forcing young workers who are trying to afford health insurance, buy a home, or pay off their student loan to subsidize those with a lot more wealth than they have. 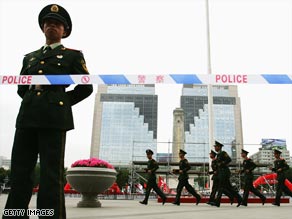 As I predicted, the latest terrorist attack in China is the work of fighters working for an independent East Turkestan.

At least one attacker jumped off a vehicle passing the checkpoint in the town of Yamanya and stabbed the four men, a local security official told the Xinhua news agency.

Yamanya is located about 20 miles (30km) from Kashgar, also known as Kashi, where a raid on border police last week left 16 policemen dead and 16 others injured.

China is in a special position to help the United States in our war for Pakistan, because both China and the U.S. have long-standing ties with Pakistan dating from the Cold War.Â  We both have been moving closer to India in recent yeras, because of India’s globalization and economic growth. Together we should work to help the government of Pakistan free itself from ISI rule.